Happy Father’s Day to all the dads and father figures in our lives! In honor of the day, we’re paying tribute to Lehman’s founder Jay Lehman. Jay worked tirelessly his whole life, dedicated to family, faith, and community – the framework of life well-lived.

Jay bought a small hardware store in his hometown in 1955. He initially built the business to serve the Amish community. It soon grew to serve customers around the world, providing everything from old-fashioned treats to practical, non-electric goods to live a simpler life. Jay had little schooling past the tenth grade, yet he obtained a vast knowledge of the world through traveling. He worked in Europe after World War II. He later spent a decade living in West and East Africa as a travel agent for church and secular groups. He also spent a year in France organizing the Mennonite World Conference in Strasbourg. He was a member of the Kidron Mennonite Church and was faithful and charitable to organizations such as Mennonite Economic Development Associates and Mennonite Central Committee, donating a portion of his pre-tax profits from the business, even in the lean years. “Jay lived for the good of others. You don’t plant trees to provide shade for yourself or lumber for your home…you plant trees to make life better for others – a life-constant purpose for Jay. Jay, you planted and we benefited. Rest in peace.”
– Mark Coblentz

“Jay Lehman was the kind of man that you might meet only once in a lifetime. He embodied the very values of the community in which he was born, lived, and worked.”
– Bruce Stambaugh, Blogger “I tip my hat to folks like Jay. I admire anyone that places so much faith in God and service to fellow man. I admire his business sense. He was no Harvard MBA whiz-kid, but he was street-smart in ways that proved essential in understanding what his customer wanted, and how to treat them.”
– Bill LaPierre, Blogger

“Like his Amish neighbors and friends, what came first in Jay’s life was family, faith and community. He didn’t have an interest in fancy cars or big titles. He wanted to live in service to others.”
– The Kidron News 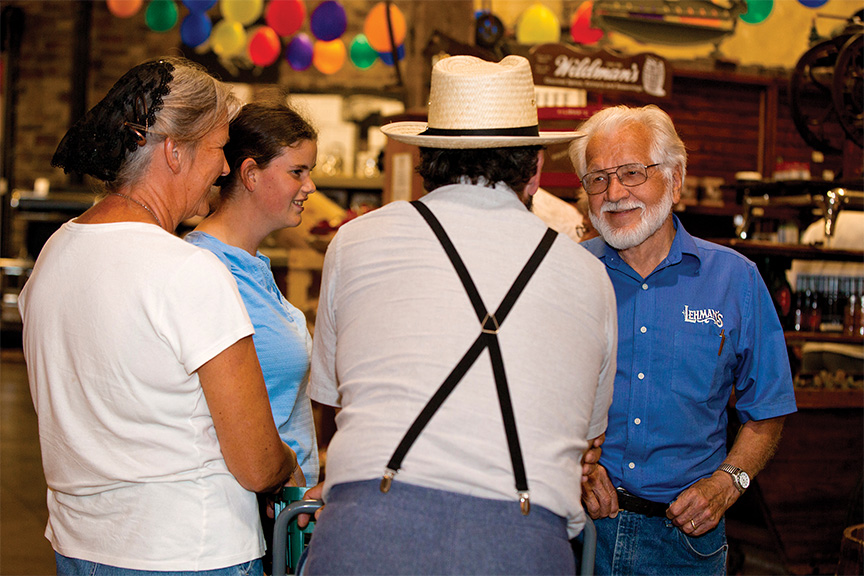 “Lehman’s in Kidron is filled with many treasures, but none was more special than founder ‘Jay’ Junior Ezra Lehman, who passed away at the age of 91 on July 26, 2020, with his family by his side.”
– The Bargain Hunter

To learn more about the legacy of Jay Lehman, click here.

This article was first posted in June 2021.

Sorry to hear the news about Jay Lehman. We have stopped in a few times going down to Amish country. We always enjoyed the store and the many items for sale and display. I enjoyed having a conversation with Jay who reminded me of my grandfather who missed 106 by a few days. Jay loved to talk which I enjoy also. He wasn’t in a hurry and eagerly gave you awesome information before my time. I will miss him as I am sure to be in the store soon. Our prayers and condolences.
Daniel & Esther Lewis.

Thank you so much for your kind comments about my father. Glenda Lehman Ervin

It is sad to hear of Mr. Jay passing, I had the pleasure of speaking with him several times in my trips to your area, With his help I purchased several different items, they were all in different corners of the store, but he personally took me to each item, his commitment to me, as a customer, and my guaranteed satisfaction, made me wish I had had more money to buy things, and spend just a few more mins with him.That day Mr. Galen was at the cash register, rang up my purchases, I felt like a King..

Thank you for the beautiful tribute to a life well lived! Happy Father’s Day!

I had not realized that Mr. Lehman passed away, I am so sorry to learn this and I am thankful for the incredible business for this lifestyle that he built and thankful for those carrying on his hard work. Thank you for sharing these kind memories of him.