A Bedtime Story – On The Beaten Path

There’s a two-lane highway at the end of our driveway. And, after almost eight years, I still haven’t made up my mind as to whether or not proximity to the pavement is a good thing.

From the perspective of a continually developing philosophy of “how to live life”, I should have located my family on the gravel just short of the last electric pole. I enjoy my “modern” conveniences and tend to spend my time trying to minimize the cost of them, and the dependency they tend to engender, versus doing away with them altogether.

Once a month, normally coinciding with when the bills arrive, I will sit back in the recliner and daydream about buying fifty acres in the woods, building a cabin, and stocking it with hardcover books. Someplace well away from the sounds of traffic and other human inspired noise. Not so much as a telephone inside throwing distance. A couple of inches of snow on the porch roof and the place would look fantastic on a Christmas card. At some point reality inevitably reasserts itself as my hind-brain clears away the ivy and bolts a satellite internet antenna to my imaginary stone chimney. The magical appearance of a monstrous four wheel drive, complete with snow blade and bumper winch, doesn’t help to maintain the illusion either. So it’s back to the noise.

On the plus side, living close to the highway means that if I can get out of my driveway in the winter, I can generally get to wherever it is that I need to go. The State is good about keeping the highway clear and the plows hit the pavement well before the kids and I have to do the same. This little luxury is brought to home any evening I notice the neighbor working his way out to the pavement with his tractor-mounted snow blower. His driveway is on the end of a section long township road and, given the suspected age of the tractor, I doubt that cab is well heated. Being handy to the highway also means that the volunteer fire department and ambulance service make good time getting to the house. But that’s another story.

On the minus side, our mailbox is held onto the post with duct tape and a portion of our golden retriever’s skull is currently held together with staples.

The mailbox I’ve given up on. What I’ve discovered is that properly bolting the mailbox to the swing arm only guarantees that the box becomes deformed past recognition when it comes in contact with a snow plow blade traveling at fifty-odd mph. Afterwards, the swing arm always looks great. Go figure. And the mailbox . . . well, the mailbox can usually still be used- kind of. A little bit of mechanic’s wire, and judicious use of a ball-peen hammer, can accomplish miraculous things. Unfortunately our postal carrier quits delivering the mail to the house when hand tools are required to open the mailbox. I suppose he’s just not very handy that way. A couple winters worth of abuse and I finally threw in the towel. Taping the box to the arm means that while the mailbox will go flying- it tends to stay in one piece. And the swing arm still looks great. So once or twice a winter you’ll find me taping the mailbox back in place. The locals wave as they drive by. Wade taping on his mailbox, like geese flying south for the winter, is a clear indicator that the snow plowing season is officially underway.

I haven’t given up on the dog quite yet. Increased fatalities, among the pet population, is something we’ve resigned ourselves to since moving out of town. Wild animals, poisonous chemicals, farm machinery . . . it happens despite due diligence. One problem common to living in or out of town is traffic. However, the difference between residential and highway traffic is about thirty to forty mph and close encounters with the latter tend to be fatal. Toby got lucky. He went nose-to-nose with a sugar beet truck and lived to tell the tale.

Most golden retrievers I’ve met are warm, loving, and intelligent animals. Toby is warm, loving, and dumb as a rock. So, from an anatomical standpoint, if he was destined to get hit by a truck; getting his skull cracked was probably his best choice. No casts and it appears there’s no lasting damage. Of course the flip-side to that is that working brain cells are a precious commodity, particularly in his case, and he really couldn’t afford to abuse the few he’s got. Ten days the staples come out and, if his current condition is any indication, he’ll be right back to his warm, loving, incredibly thick-headed self.

I could probably stand a little less pavement in my life. But, in reality, I suppose things balance out pretty well in the end. Maybe next year I’ll have to try and shake things up a bit. Something bold and daring. I haven’t found anything like it locally, but I noticed last week where a person can buy “canary yellow” duct tape from a place in Wisconsin- online. 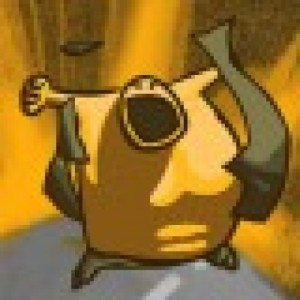