There was a time when everything was made by hand – no automated machines or computerized factories, just the labor of hardworking people. While times have changed, many people embrace the “old-fashioned” way of doing things. Our local chandler, Christine, is one of those people.

Unlike other shops, Christine makes every candle by hand. There are no automated machines or conveyor belts – she does all the work herself.

“People have said, ‘Why don’t you expand? Why don’t you automate?’ That’s just not me,” Christine tells Country Life. “It goes back to my artistic side. I wouldn’t be happy as a manager.”

Located in a historical village, Christine’s charming workshop (also known as a chandlery) has a history all of its own. Built around 1870, her current shop was once a washhouse. In fact, as she takes us inside, Christine points to the original wash kettle that is still there.

Her quaint work area is full of the necessary supplies she needs, from big slabs of wax to long work tables. Today, those tables are full of thirty-some green candles scattered about.

“I’m working on an order for Lehman’s,” she explains.

Christine makes an assortment of candles for Lehman’s, including the white dripless candles, traditional bayberry candles, pine cone firestarters and the holiday spiral candles, which she says are her favorite to make. Those green candles on the work tables are her bayberry pillar candles in the midst of the candlemaking process, waiting to cool and eventually be finished. She hand poured the wax yesterday, and she will work on molding later today.

“All of my candles are solid colored. I mix the colors by hand and eye, and keep it as consistent as I can. All my colors are made for candles, so they stay dripless and smokeless.” Her candles are what she describes as “self-consuming.” They won’t drip or smoke like ordinary candles, simply because of the materials and blend of waxes she uses.

She also showed us some of the tools her husband, Chris, has made for her, including a jig for sawing the bottom of her candles. His engineer background, Christine noted, has helped shape how she does things, making her more efficient.

Christine has been making candles the old-fashioned way for thirty-five years; she has been at her shop for thirty of those years. She studied art in college and received a Bachelor of Fine Arts degree, focusing on weaving and printmaking. It wasn’t until she visited the Yankee Peddler Festival years ago that she started to dabble in candlemaking.

She spent about a year to eighteen months studying the science, experimenting with different waxes and wicks to see what worked best. Eventually, Christine returned to Yankee Peddler but instead of being a spectator, she was a vendor.

“It took quite a bit of time in the first few years to establish the correct formulas that did what I wanted, so the candles would burn well,” she says.

She also explained to us that as little as an ounce of wax added to a wax batch could make a big change. The diameter of a wick also plays a huge role in how well a candle burns. If a candle has the wrong size wick, it will not burn as long.

“Not all candles are equal,” she says. “Better materials will make a better candle. It’s worth the time to make it right.”

Hearing Christine speak about her work, it’s obvious that she is a true artist, one who does not mind hard work. You’ll find her in her shop 5-6 days a week, doing what she loves. You’ll also find her shop cat, Sophie, just one of the seven cats Christine has rescued and adopted.

As Christine tells us, her goal is to make a candle where people “can light it and enjoy it.” We think you’ll find she has done just that, and then some.

Note: Stop by Lehman’s retail store in Kidron, Ohio, and you’ll find a bigger selection of Christine’s candles. This post was originally published in September 2013. 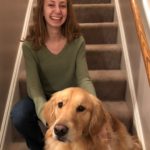 Jenny Smith is the editor of the Country Life Blog and the Digital Content Specialist for Lehman’s. It’s not unusual to find oil lamps, canning jars and freeze-dried food on her desk. She is an avid reader, card maker and dog lover. In fact, she is currently teaching her Golden Retriever to not take her shoes. It’s an ongoing battle.
View all posts from this author