Why We Don’t Buy Plastic Toys

Something happened when I got pregnant for the first time. I looked around my house, with its hardwood floors and muted earth tones, and suddenly I could see clutter.

Plastic, light-up abominations littering the floors. Vinyl everything in ridiculously garish colors, threatening the warm zen I was trying so hard to cultivate in our tiny mountain home.

I saw endless packages of batteries, broken plastic vehicles getting thrown in the trash, and every year, the behemoth mountain of Junk-That-Would-Soon-Be-Forgot, and I said no.

It turns out, I was onto something, aside from hating endless renditions of Old MacDonald Had a Farm and migraine-inducing light up exersaucers.

For a lot of reasons, my husband and I both made a pact, and we broke the news to our families: no plastic toys.

Family and the Plastic Toys Ban
It was a hard road to travel at first. I mean, EVERYTHING is plastic, and try as we did to avoid it, our pleas were falling on deaf ears to our families. Even though our son was under a year old, it seemed every other week we were getting a box full of banned plastic contraband in the mail.

We wound up sending a carefully worded message to our dear friends and family one day, finally spelling it out once and for all that plastic toys, while appreciated for their generosity, would be returned or given away.

And sure, it made us feel like jerks for a while (because who in their right mind turns down free stuff), but the more research we did, the better we felt about our decision.

Plastic Toys and the Waste Problem
One of my biggest beefs with plastic toys was that they couldn’t be repaired. If something broke, it was literally custom molded in a factory, and even my incredibly handy husband had little else to say except for, “Maybe we can recycle it?”.

It was maddening to think of the amount of plastic toys each year that would inevitably get broken or destroyed and have to be thrown away, and I just couldn’t deal with that.

Plastic Can Disrupt Hormones
The more research I did, the more I became absolutely determined to limit plastic in our home. It wasn’t just the waste, it was the health ramifications.

Two very common chemicals found in plastics (particularly in products produced overseas), BPA and phthalates, are known to cause hormone disruption. What this means is that exposure to these materials can actually disrupt our kids’ growth and development.

Even with my son (mostly) being past the age of putting everything in his mouth, these chemicals can be absorbed through the skin, and infants in particularly are highly susceptible to the effects.

Bottom line, limiting plastic exposure became a safety concern, and we put our foot down on it — HARD.

Plastic Isn’t a Sustainable Material
Look, I’m a realist. We’re already fast approaching the days when our son has begun to ask for Transformers instead of trains, and I get that they totally don’t make a wooden Optimus Prime. Compromises are often made, albeit sparingly, where plastic is concerned. We try to limit it everywhere we can, from our toothbrushes to our tupperware, and that’s all we can do — try.

That said, there’s just no denying that plastic isn’t a sustainable material to produce. It’s made from petroleum, a fossil fuel, and requires a whole boatload of processing and refining to become the finished product we know and use (and often, throw away).

I hate how much energy producing plastic consumes, only to wind up in the trash, and I decided to put the kibosh on it.

Plastic Toys Are Often Over-Stimulating
During my research into the best kinds of toys for developing minds, it seemed to become more and more apparent to me that colors and noises and lights were overwhelming and distracting for babies and kids.

During these younger years, bright young minds are built to observe and interact with their environments, but often this process gets severely delayed because they’re constantly bombarded by things they’re just supposed to LOOK AT (and how boring is that??).

Instead, I wanted to actively seek out toys that were simple to the point of making it easy for my son to focus on a core skill or activity, like fine motor skill development or cause and effect, without a bunch of insanely distracting bells and whistles. And to my utter amazement and surprise, it worked, and now I have an evil little genius running around my house speaking in complete sentences telling me he’s going to go take something apart, and could I please get him some graham crackers to snack on while he does it? 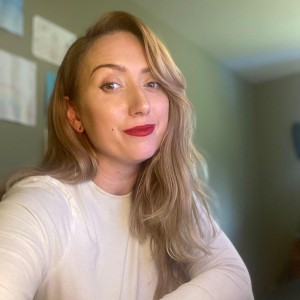 Destiny is a freelance writer living in the mountains of small town of Montana with her family, where they raise chickens and ducks, forage and grow some of their own food, and continue to plan their off-the-grid dream home. When she’s not writing an article about homesteading or sustainability, you can catch her baking with her toddler, or staying up all night with her husband philosophizing over a glass of craft beer.
View all posts from this author Making apple cider vinegar is so easy to do, but better yet, you’ll get a whole bushel of benefits. How to Make Apple Cider Vinegar

Learn how to make apple cider vinegar with your leftover peelings and scraps. Destiny shares her tips and homemade recipe for making this beneficial staple.