Editor’s Note: Earlier this week, founder Jay Lehman celebrated his 90th birthday! Continuing the celebration, his daughter, Glenda Lehman Ervin, is sharing with us more about Jay and his journey over the years.

A depression-era baby, born in a rural village and raised with little formal education in a one-room school house, Jay Lehman is leading a life well-lived. He is an oxymoron and a legend.

Born in 1929 (that’s right, he is 90!), Dad self-describes himself as a farm boy, even though he is an incredibly successful entrepreneur, husband and father.

If it was easy, everybody would do it.
That Farm Boy created a successful international business, bringing hundreds of thousands of visitors to Ohio, as well as employing hundreds of employees, and providing an income for local, Amish vendors. When others said it couldn’t be done (“nobody wants old-fashioned, non-electric stuff anymore”), he proved it could be done. “If it was easy,” he says, “everybody would do it.” A man of few words, when asked if he thought Lehman’s would become the iconic destination it is today, he said, “Nope.”

He attends church every Sunday and shows up at work most days. He also plays Rook several times a week with family and friends. We almost have to schedule time to hang out with him!

That Farm Boy has been featured in Entrepreneur Magazine, The Wall Street Journal, The New York Times and countless business books.  He was even interviewed by Paula Zahn on “Good Morning America.”  But still, when asked where he works, he says “A hardware store.”

The Grandfather of Green

That Farm Boy has planted over 30,000 trees, everywhere he has lived and worked.  He was a steward of the land before being “green” was in. One publication even dubbed him The Grandfather of Green. He can fix anything, whether it’s a tool, an appliance, a shoe or a chair. He was upcycling before that word was common-place (I told him he is so old-fashioned he is back in fashion!). Growing up, there was a bench in the garage where we put items needing to be repaired. There was almost nothing he couldn’t fix.

The family that prays together, stays together
To this day, Jay remains close to his siblings, who get together, with all the assorted cousins, nieces, nephews and grandbabies for every major holiday. There were over 40 of us together for Easter. With four grown children, five grandchildren and grand-baby number one on the way (any day now), he is a role model, more by his actions than his words. 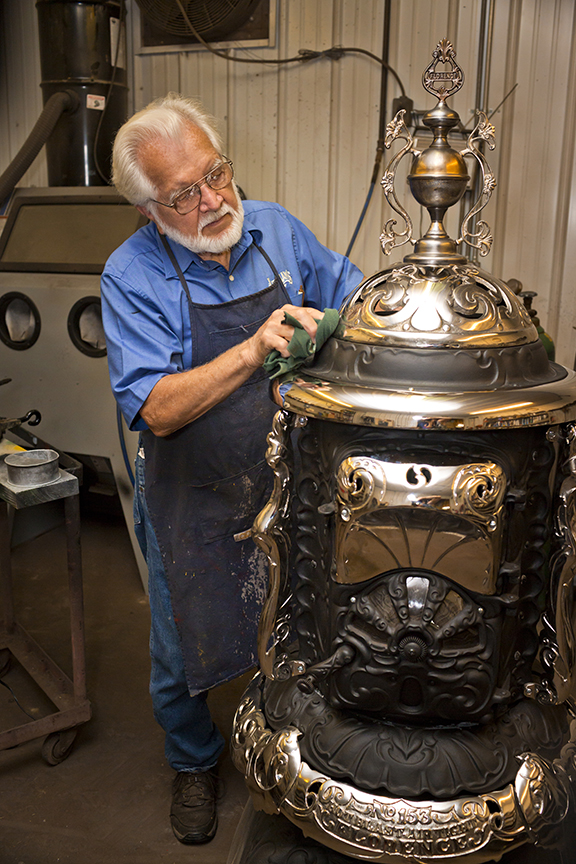 “I really like old stuff,” says Jay, as he painstakingly restores an antique stove.   The retail store features a museum-quality assortment of antique tools, appliances and gadgets. Customers have told us a visit to Lehman’s is like a visit to a museum, as well as a store.

On a sunny day, he can be seen driving around in his Ford Model T. He also keeps it running smoothly, which is not easy.

His many hobbies include stamp and coin collecting, and he is a wicked good tennis player. He is also a fierce competitor, and we laugh when Dad and his wife, Emma, play ping pong or Rook – they play to win! Travel, though, will always be his first love.

More frequent flier miles than he can count
In addition to serving in PAX (The Mennonite Church’s voluntary service program) in Europe after World War II, he spent a decade in West and East Africa, serving as a travel agent for church and secular groups traveling in and out of the area. He also spent nearly a year in France, working to organize the Mennonite World Conference in Strasburg in the early 1980s. His travels, for work, volunteering and pleasure, have taken him all over the world – to over 70 countries at last count.

To whom much is given, much is expected
Dad always told us, “To whom much is given, much is expected.” He tithes fairly and generously, with no need to be recognized. He is exceptionally faithful to the Mennonite organizations, including those offering micro-loans and fair trade organizations. When his wife, my mother, died unexpectedly in 1999, he set up a scholarship fund in her name at Associated Mennonite Biblical Seminary that has provided funds for many deserving women over the years. He has always donated pre-tax profits from his business, Lehman’s, even when the profits were lean.

He is a truly remarkable human being—humble, funny and kind. His generosity of spirit is simply astonishing. That is why he is loved and respected by so many people from all walks of life. Glenda Lehman Ervin is the daughter of company founder Jay Lehman and VP of Marketing. “I love talking to people who are on their journey to a simpler life. Step by step, we are all on the path to a meaningful, satisfying life. We are thrilled that Lehman’s can be a part of that journey.” Glenda lives in a woods with her husband and two children, just a few miles north of Lehman’s, in Kidron, OH. They have two cats named, surprisingly uncreatively, Baby Cat and Girl Cat. Lehman's™ Vice President of Marketing and daughter of founder Jay Lehman. She has filled her home with Lehman's products, and enjoys the challenge of using low tech in a high tech life. In addition to media relations and advertising for Lehman's, she speaks to groups about the history of Lehman's and the unique growth of the family owned and operated business.
View all posts from this author