“We forget how fragile normal really is,” Kathy Harrison once noted. “It would take very little for the shelves to be empty, the water tap to be dry, 911 to stop responding and a blank screen to greet us when we pick up our cell phones. A terrible storm, a cyber-attack, or a failed power grid could leave us sitting in the dark and completely unprepared with the skills, supplies and tools you need to handle the situation. Panic is never good and a lot of people would panic.”

This statement defines Harrison’s vocation: practicing and teaching preparedness, with an emphasis on the sensible rather than the complex or expensive.

Sometimes called the “Doris Day of Doom,” Kathy Harrison was the “nice” candidate featured on National Geographic’s Doomsday Preppers series. She and her family stood in contrast to the hyper-masculinized “Rambo”-style participants who treated prepping as a macho gadget-rich competitive sport for paranoid types who expect black helicopters to target them for the new world order.

Instead, Kathy views prepping as any other kind of insurance policy, on par with auto or fire insurance. Her interest in self-sufficiency goes back many decades and stems from one inarguable fact: disaster aid starts at home. “After 9/11 – and certainly after Hurricane Katrina – I realized that, holy smoke, the cavalry doesn’t always charge in to rescue you.”

So Harrison and her family became their own “cavalry.” But rather than the “Rambo” approach with guns a-blazing, they sought knowledge. Cheesemaking, canning, gardening, woodworking, beekeeping…this “bank of skills” can keep them independent from mainstream society if necessary. For skills they lack, the Harrisons have built up a community of like-minded people around them, so skills can be shared around. Prepping isn’t an “obsession” with the Harrisons – it’s just the way they live. In her book Prepping 101, Kathy educates people on the wisdom of a prepared lifestyle; not out of fear, but as a way to be “ready and resilient” when an emergency arises. Because prepping can seem overwhelming for beginners – a “catastrophe overload,” as she terms it – Kathy breaks the process down into 40 easy steps, everything from calculating water needs to addressing sanitation, pets, and laundry.

“Television programs that depict people interested in preparing for difficult times as delusional, gun-toting, bunker-dwelling paranoiacs have gone a long way toward stopping much sober, reflective conversation about what a family resiliency plan should look like,” Kathy notes.

The Harrison’s approach to prepping gives them a tranquil, cheerful outlook on life. It demonstrates how skills, knowledge, and community are just as critical to preparedness as fancy-expensive gadgets and endless firearms.

Editor’s Note: Lehman’s hosted Kathy in September 2019, where she shared her experience with our customers. For the latest store events and visitors coming to Lehman’s, check out our store events page.

How do I contact Ms. Harrison? I am a foster parent and was more than touched by her two books. My family are also somewhat of preppers but we also have the Blessed Hope of Jesus’ soon return.

Kathy- the most important thing about diy is that these skills are soon forgotten. I am often asked if it “really pays” to can, when a case of beans or corn can be bought cheaply at Save-a-lot. Yet I meet people who have never tasted rhubarb. We enjoy elderberry pies and cobblers: now elderberries are considered a “new” health discovery and the pharmacy shelves are full of preparations with the berries in them. Wouldn’t it be better to serve your family delicious foods? If those of us who are interested will learn to garden, to forage for wild foods, to raise animals even in a small backyard, to make soap and fresh butter and cheese, the skills will be second nature when we need them. and we will. Bertille Mayberry 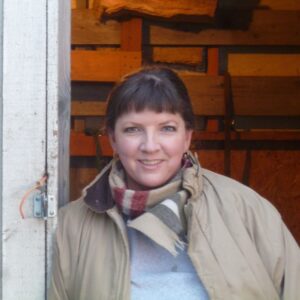 The Recipe for the Perfect Potluck